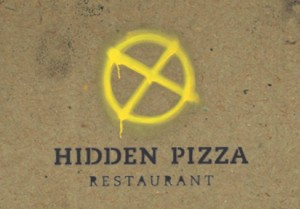 Melbourne local news/bloggers started buzzing about how great the place was and what a clever idea the “free pizza” was. However, it turns out the “Hidden Pizza Restaurant” campaign was a clever construct of Clemenger Proximity + Sensis + OMD. It appears some marketing directors got together with a big budget and too much time  on their hands and created this campaign to promote Yellow Pages online.

Did it work? Well that is hard to say, because it is nearly impossible to tell whom the campaign targetted, what the message was, and what the goal of the exercise was. We can say, though, if our clients allowed us to give away free pizza, we would certainly do a better marketing job than this program did.

What was the aim of the campaign?

If it was purely a branding exersize for YellowPages.com.au, then you could probably argue that it was a moderate success. The campaign has certainly given the brand eyeballs in the marketing community, as people are talking about the Hidden Pizza Restaurant program, and there are marketing magazines that are discussing the merits of the exersize. However I would say that more has been done for the “Hidden Pizza” brand than Yellow Pages, as most people are talking about how great the restaurant was and not how they found out about it.

Social marketing is also a double edged sword. Most social marketing commentators are actually saying the exercise showed how yellowpages.com.au is a poor way to spend your marketing dollars if you are looking for a high position in search. Even now, after the campaign has ended, the front page of the website and other bloggers are optimised better for the front page of Google. To further embarrassment, the Yellow Pages entry for the Hidden Pizza Restaurant is now returning a dead link, so there is no way to see how well optimised the page is.

Maybe it was all about the promotion and buzz? 3756 fans on Facebook is hardly a groundswell, especially when you consider other restaurants with less marketing dollars have a greater following.  I also wonder how many of the “fans” are employees of the three companies involved? Again there are people talking about the program, and no doubt “hidden pizza” was probably a trending search for a while. However, how much of that will generate interest in advertising on Yellow Pages?

To be crass, the campaign goal might have been to prove that, in order to find a restaurant, you have to use the Yellow Pages, in which case it missed the mark by a country mile. The campaign probably did more for Facebook, Google/SEO, Free Pizza campaigns and the Hidden Pizza Restaurant than it did for Yellow Pages. Which brings me to a separate point. For all we can tell, it looks like restaurant was temporary; what a complete waste of ongoing marketing.

Who were they targeting?

Anyone with any idea about social media marketing would view this campaign with scepticism, so the message is going to be filtered out. Anyone with money to spend on things like Yellow Pages are going to use multiple ways of growing their presence, such as social media, SEO, customer feedback etc. They are not going to rely on spending thousands of dollars on a single page online. Which demographic is going to say “YES! This has shown me the power of advertising in The Yellow Pages.”?

We have a far better idea for growing yellowpages.com.au as well as the clients they serve. Why not partner with independent local pizza restaurants and run a “buy 1 get 1 free Wednesdays” if customers download a coupon for the 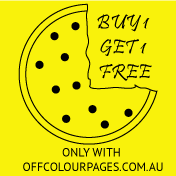 restaurant from the yellowpages.com.au. Make a “Free Pizza” campaign page on Facebook where people can find their local participating restaurants. If customers take a photo of themselves with the free pizza and post it on the Facebook page, they go in to win more free pizza, or something.

Surely it would be more of a brag for Sensis if they could prove their media, yellowpages.com.au was worth something to their clients, either in terms of clicks or visibility. At the moment all this campaign says is, if you have lots of time and money to spend on PR and promotion, then yellowpages.com.au is one of the ways your clients can get in touch with you.

Maybe someone out there can tell us if Yellow Pages got value for money out of this program?

Both Clemenger Proximity and Yellow Pages have released their statements on the program. Unsurprisingly both are claiming success with over 8000 people finding the restaurant, 70% through Yellow Pages. We would say it is more of a success for Clemenger, who showed they could take a brief and create something amazing in a very short space of time. For Yellow Pages, however, we still think it is marketing dollars poorly spent. The program mostly proved that Yellow Pages don’t understand social and online media, and that there are better ways to find a business than through their website. There would have been around 13550 searches on Google during that period for Pizza in Melbourne, and even with the power of Clemenger and Sensis, Yellow Pages managed to capture just 5600.