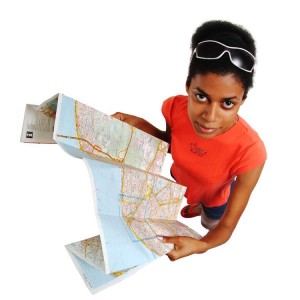 In shopping mall design, the Gruen Transfer is the exact moment where, in a shopping mall, you lose your direction and start to wander around aimlessly. It is named for Austrian born American shopping mall architect Victor Gruen. It was really only in researching this post that I realised how much of an impact he made on the design of shops, and so on the behaviour of pretty much the entire western world.

What Gruen designed was the world’s first fully enclosed mall which opened in 1956. His grand design was that the first modern shopping mall would be the centre piece for an entire community. However, the mall was commercially successful, but the original design was never fully realized, as the intended apartment buildings, schools, medical facilities, park and lake were not built. . Construction costs totaled twenty million dollars, and the mall had seventy-two stores and two anchor department-store tenants, Donaldson’s and Dayton’s. The concept of having two anchor stores that drive customers around was ground breaking.

The New Yorker called Victor Gruen short, stout, and unstoppable. Born in 1903, Gruen immigrated to the United States when Nazi Germany took over Austria in 1938. He landed “with an architect’s degree, eight dollars, and no English.” Victor Gruen graduated from the Vienna Academy of Fine Arts. In 1951 he founded Victor Gruen Associates, and as an urban planner was instrumental in formulating master plans for such cities as Fort Worth, Tex., Kalamazoo, Mich., Cincinnati, Ohio, and Fresno, Calif.

Another of Gruen’s new concepts was to create a multi-level shopping facility. Gruen put stores on two levels, connected by escalators and fed by two-tiered parking. In the middle he put a courtyard under a skylight, with a fishpond, sculpted trees, bird cages, and a café.

Victor Gruen didn’t just design a building; he designed an archetype. He created a retailing model that became the paradigm of retail property development.