Something happened to Digg around 3 months ago. When Digg moved to Digg 4.0 they not only lost their edge, but they also lost about 30% of their traffic too. The above graph shows the overall number of page views, the below graph shows the page views per user. 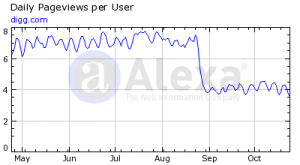 Now, it seems, they have been caught out manipulating the figures to improve statistics for advertisers. If this is all true, which it seems to be, Digg has lost any of the credibility it built up over the years. Digg really messed up when releasing V4, they failed to listen to their users when they left in droves.

The author of the expose has asked for an explanation that is yet to be forthcoming. Even though Digg have been guilty of manipulation in the past, both passively and actively, this is the first time it has been seen in such an obvious and large scale.

This whole scenario is a nightmare for marketing professionals, and people like us who talk about new media as the way forward for advertising. All online marketing is open to people scamming, just because it is so anonymous and low cost to try to manipulate the system. The nightmare comes when websites like Digg actually stop providing the credibility this market deserves.