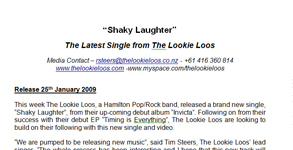 You can grab a free sample Band Press Release here.

The Lookie Loos are a rock band from Hamilton, NZ. Creative Development created a Press Pack that was sent out to local and national media detailing their new single and up coming tour. The result included interview with national newspapers and column inches in local press.

We crafted and developed a publicity angle for The Lookie Loos so that their story would remain fresh. Their music has done a lot of the talking for the band, however some of the best parts of their own personal story had to come out in the press release.

Some of the resulting press included;