Just under 3 years ago we wrote about who was winning the 2010 Australian Election based on Social Media. We incorrectly suggested that, although it was close, the Libs would win because they had a far greater following online. This time we are improving our methodology, and once again we are trying to find out who will win the 2013 Australia Election in social media. We are living in an age of 24/7 social media, and we believe that the effect a person has in the new media is as important as the old media. Social reach and influence are important not only to ensure that a political message is spread, but also that a political party member stays relevant and in touch with issues. We compiled this document on the current status of social media in by Australian Politicians. We looked at every member of the Australian Parliament, and what their use of social media was including Twitter influence and if they used their Facebook page.

Google Trends shows that, over the last 90 days, the Lib party has been searched more frequently in every state. Across Australia they have been ahead in both searches and news references since the last election. Obviously there can be a murkiness to these statistics, because people may not be searching for the federal Labor or Lib parties, however there is no way of calculating the intent of users, so this is the best we can get. One an Internet search level, it is clear the Lib party are ahead.

On a party leader level, Gillard has almost double the search volume of Abbott. This time during the last election they were much closer together, and this may be another symptom of Gillard being the current PM, rather than any preference for leader.

Since the last election, Social media has become far more mainstream, and this is reflected in the numbers. The Labor party page has 10 times more followers on Facebook than 3 years ago, with fans measured in the hundreds of thousands, rather than just thousands.

If the election were based on Facebook fans, the Labor party would win. Their members have by far the highest average number of fans, and the highest in total, led largely by Julia Gillard‘s 161k fans, which is almost 5 times the number of fans that Tony Abbott has. Of the top 10 most followed members on Facebook, Labor have 5 with the Libs on 3, and Alex Gallacher for the Greens and Andrew Wilkie as an independent.

The trend is reversed when looking at the party level, as the Lib Party has 53k with the Labor Party only 44k, and the Australian Greens have 48k fans. Again, we are still waiting for a “Super Poke” from Julia Gillard, or maybe Tony Abbott will trade with us on Farmville. 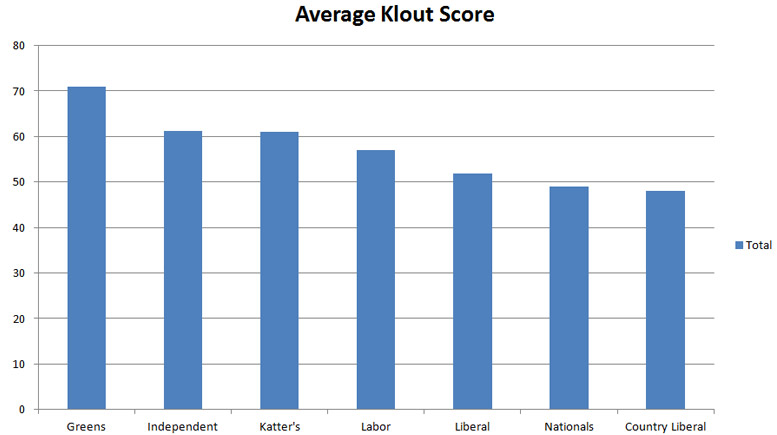 For twitter influence we looked at Klout, a social measurement serVICe. Again, as a reflection on the importance of Social Media, Tony Abbott is now following people and seems far more active on the site. From only has 603 followers in 2010 to 126k followers now. Julia Gillard on the other hand has grown from 43000 followers to 388k, including us, still! Julia’s influence is in the top 91% of people on the web, with her Twitter account clearly the center of many hubs.

This time, compared with the last election, the Labor party leads by quite a way in terms of social influence. The two social big guns of Julia Gillard and Kevin Rudd help lead a party that have some very active participants in Twitter. By contrast, 17 of the 26 least influential members are Lib party members, including poor Jo Gash, with zero followers.

Also worth noting is that on average the smaller parties have more active members. Obviously this is helped by the fact that they have fewer members (so have to be more active). Overall this time it looks like the Labor party have improved on their use of Social Media, and have increased their reach. Over the next few weeks we will see if this will translate into a winning formula for the election.